Sam Newman has lifted the lid on a Footy Show stunt that went horribly wrong and ‘almost killed’ him.

Newman and former Hawthorn superstar Shane Crawford were regulars on Nine’s show in 2011 when a prank was planned in a boxing ring on set in Melbourne.

Crawford was to last 60 seconds in the ring with American professional boxer Antonio ‘Magic Man’ Tarver. 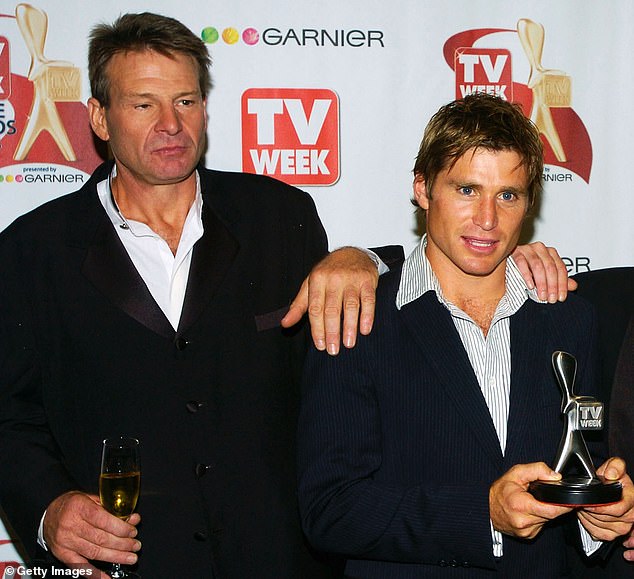 Sam Newman (left) with Shane Crawford (right) in 2004 at the Logie Awards in Melbourne. The two regular hosts of The Footy Show remained good friends after the accident

As Crawford fought the champion boxer, Newman – also in the ring – kept running in to jab him in the back of the head.

After the bell at end of the round, Crawford darted in to jab Newman one last time.

Speaking on Newman’s podcast You Cannot Be Serious, Crawford said he started swinging at Sam.

‘I’m swinging hay makers … I kept punching him and he’s just made a jump for the rope and the boxing ring was high,’ he said.

A crew member helped Newman through the ropes head first on the elevated ring as Crawford moved towards him to punch on, unaware of the danger. 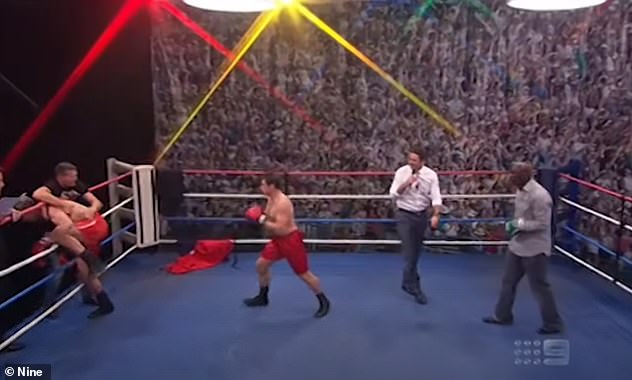 Newman was unable to get his feet through the ropes on to the narrow ledge beyond and overbalanced.

He fell head first to the ground two metres below, clipping his head on a metal step on the way down.

Footage shows him writhing on his back in pain, hidden behind the ring as the crowd laughs and cheers unaware that anything is wrong.

He can then be seen walking unsteadily in a small circle as the segment wraps up. 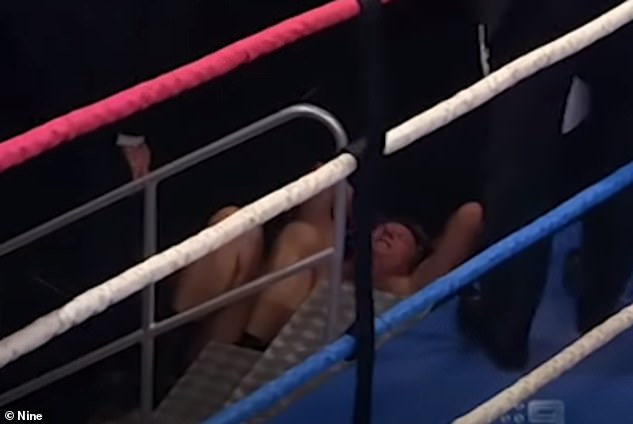 Newman could be seen writhing in pain behind the boxing ring and the steel stairs he hit his head on. The crowd laughed and cheered unaware anything was wrong

‘I hit my head on the steel steps and I spent until five o’clock in the morning (in emergency) with an MRI and a cranial inspection by David Marsh, the Richmond doctor, who’s sent the image over to … Germany,’ Newman said.

‘And I had to wait there until five. They thought I was mentally impaired – and this happened on The Footy Show.’

According to Brain Injury Australia, falls are the leading cause of traumatic brain injury in Australia, with motor vehicle accidents, bicycle accidents and sports injuries also contributing. 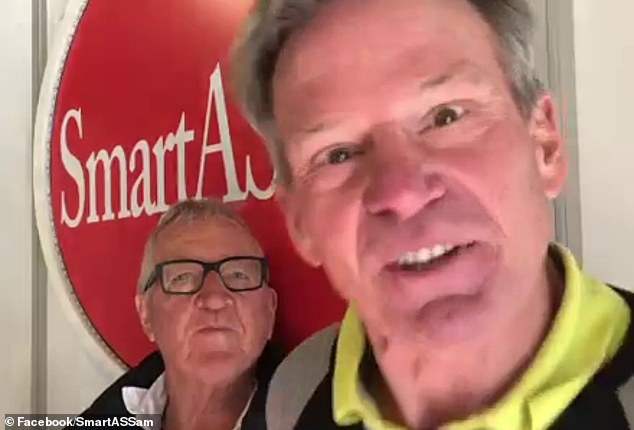 Even small knocks to the head can be fatal or may leave a person with cognitive impairment or personality and behavioural changes.

The pair told fellow football great Don Scott on the podcast that they were sworn to secrecy over the serious accident.

‘Do you know the best thing about it?’ said Crawford.

‘We weren’t allowed to tell anyone.’

Newman said they weren’t allowed to speak because of insurance and occupational health and safety rules.

‘We (The Footy Show) could have been cancelled,’ he said.

‘But he almost killed me.’

Crawford joked: ‘So close, so close but yet so far – but I didn’t mean to kill you like that.’ 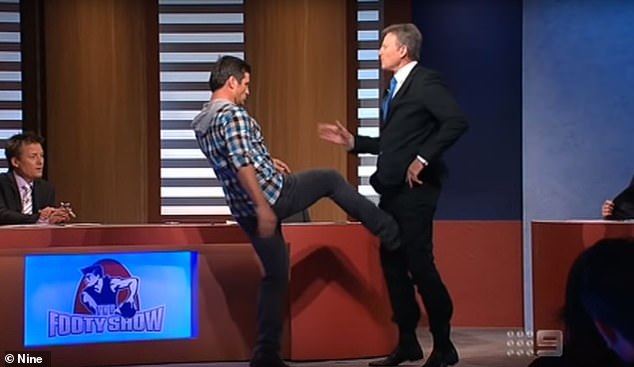 The Footy Show on the Nine Network won eight Logie awards for Most Popular Sports Program over more than 20 years.  Pictured: Shane Crawford playfully kicks Sam Newman in the crutch

The Footy Show aired from 1994 to 2018 but Newman stayed on at Channel Nine until June this year.

His 35-year partnership with the network ended after an extraordinary tirade about George Floyd during one of his podcasts.

In the rant, Newman called Floyd, whose death while in police custody sparked mass Black Lives Matter protests across the U.S. and the world, a ‘piece of sh*t’.