Another two of the new infections are customers of a popular Sydney Legion Club, who visited the venue multiple times.

Just two of the new cases were found in hotel quarantine.

Anyone who was at the Eastern Suburbs Legion Club in Waverley between 5pm and 6.30pm on August 28 has been told to immediately get tested for COVID-19 and isolate until they receive a negative result.

The two persons involved also attended the club while infectious on the evenings of September 1, 4, 5 and 6. 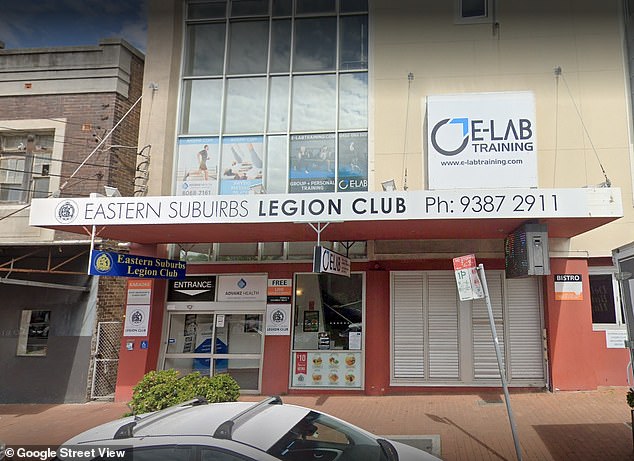 Anyone who was at the Eastern Suburbs Legion Club in Waverley between 5pm and 6.30pm on August 28 has been told to immediately get tested for COVID-19 and isolate until they receive a negative result

NSW Health is working with the club to contact and assess the exposure risk to members and guests.

Meanwhile, NSW Education Minister Sarah Mitchell has announced a plan to minimise the impacts of virus outbreaks in schools during next month’s HSC exams.

Schools have been advised to have a maximum of 75 students per exam room and principals have also been asked to limit HSC students’ interaction with the rest of the school cohort and to prioritise cleaning exam rooms.

Ms Mitchell says the guidelines, developed in consultation with NSW Health, have been issued to principals to ensure HSC students can sit their final exams without disruption.

It comes as 100 Sydney students remain in isolation after being identified as close contacts of a boarding student at Kincoppal-Rose Bay School who tested positive to COVID-19.

All close contacts including teachers and students are in quarantine and the school has been cleaned, with the boarding facility remaining open to senior year groups.

Some year groups had been sent home because a number of boarding staff are in quarantine.

NSW recorded another nine cases of the virus on Wednesday, bringing the cluster linked to Concord and Liverpool hospitals to 12, including eight healthcare workers.

Five of the new locally-acquired cases are linked to Concord Hospital. Two are healthcare workers, one is a patient and two are household contacts of the patient.

The two healthcare staff worked at the hospital while potentially infectious but reported having no symptoms during work and wore personal protective equipment while caring for patients.

‘I’m not suggesting we’re out of the woods, but we won’t be until there’s a vaccine,’ she told reporters on Wednesday.

‘I can only express my supreme anger at the Queensland premier’s decision, which in my view … is nothing more than base, loopy politics,’ Mr Hazzard said.

‘I’m appalled by what’s going on up there.’

Rapists will be surgically castrated under new laws in Nigerian state

Tesla driver, 20, is found ASLEEP at the wheel of his self-driving car speeding at 93mph